From Ron Belanger, University City CASA (Citizens Advocating Safe Aviation): MCAS Miramar airfield averages about 80,000 takeoffs and landings per year / 320 per weekday. The base recently published an update to their AICUZ (Air Installations Compatible Use Zones) document. The AICUZ is a Department of Defense (DoD) requirement for all military airfields which specifies Accident Potential Zones (APZ) and noise areas caused by their airfield operations.

The AICUZ also shows all approach and departure routes used at the airport. This information is used by local authorities for land use plans. The Miramar AICUZ required an update because of Miramar’s transition from the twin-engine F-18 aircraft to its replacement single engine F-35 aircraft.

The most significant change in the AICUZ update is the addition of 11 (eleven) new fixed wing departure routes to the original 2 (two). The accompanying diagram from the new AICUZ shows the 13 (thirteen) fixed wing departure paths in green or blue where previously there were only 2 (two). Red dots are superimposed over the original two departure paths. Helicopter departure/arrival paths (shown in tan) have not changed significantly.

FAA / DoD regulations mandate the use of the two fixed wing departure routes marked with red dots. However, the 11 new departure routes can be used by FAA flight controllers at their discretion. But, the new AICUZ has failed to update Accident Potential Zones and noise areas to include these 11 (eleven) new routes.

The original Accident Potential Zone (APZ) covers only a small sliver of University City near the 5/805 split. So, the APZ and noise hazard areas must now be updated to incorporate the huge new areas of UC placed at risk of crashes and noise hazard under these 11 new routes.

The AICUZ Update 2020 can be found on Miramar’s website https://www.miramar.marines.mil/Resources/Encroachment/AICUZ/.

Questions about the 2020 AICUZ update should be directed to the MCAS Miramar Community Plans and Liaison Office at 858-307-6603.

Illustration below adapted from MCAS Miramar AICUZ Update 2020, Chapter 3, Page 10, Figure 3-4 Departure Tracks. Scroll down to view illustrations of Closed Pattern, Arrival, and Departure Tracks included in the AICUZ Update. Departure and Arrival Corridors from the 2005 AICUZ are available at https://www.universitycitynews.org/mcas-miramar-operations-information-and-contacts/ 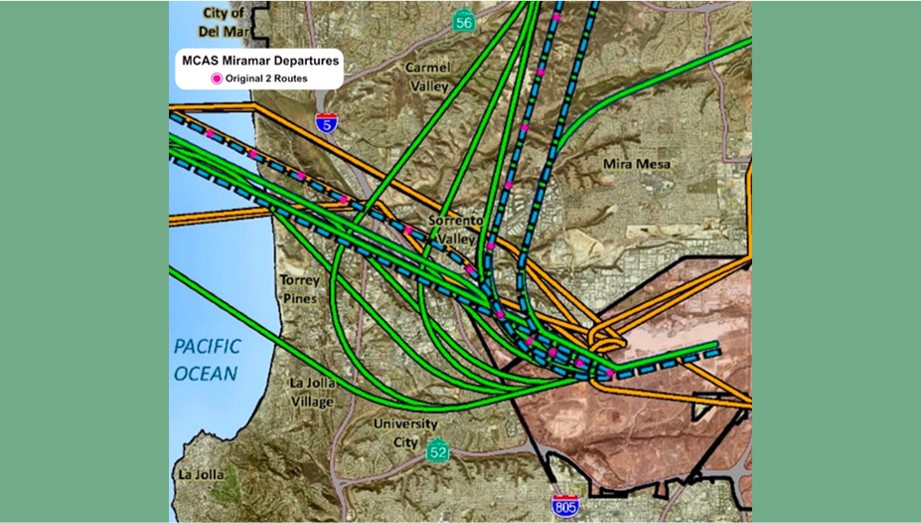 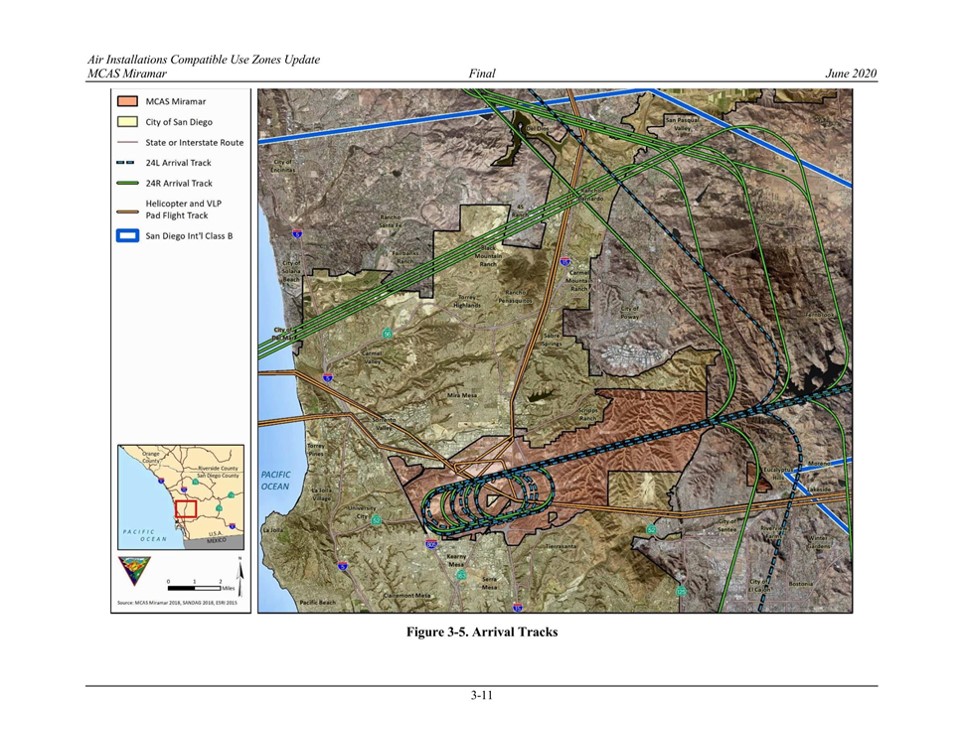 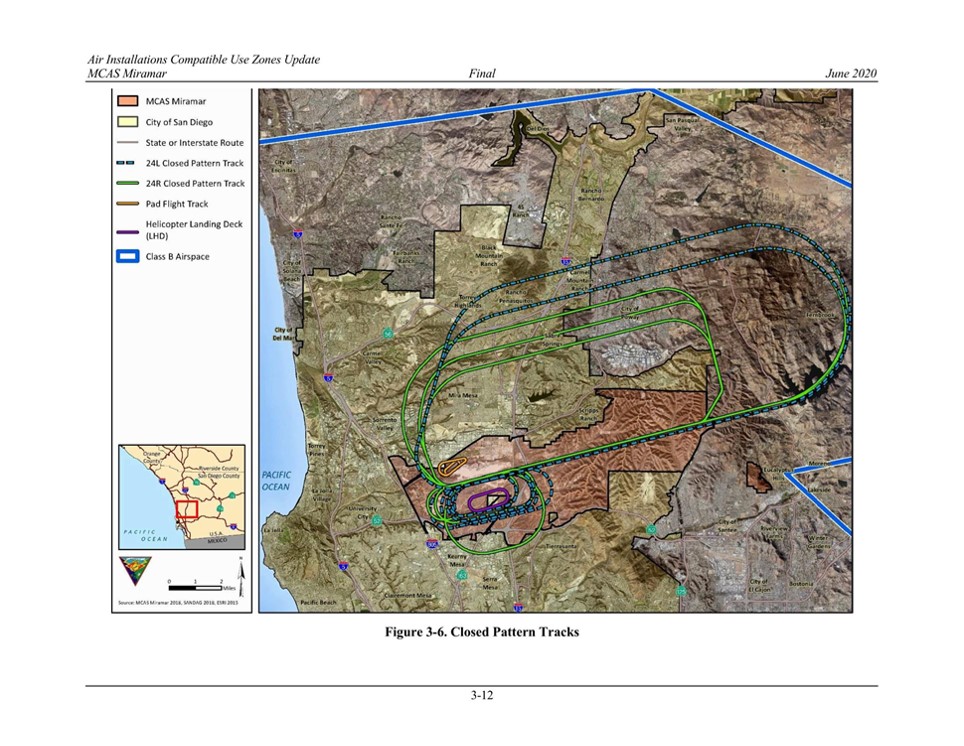 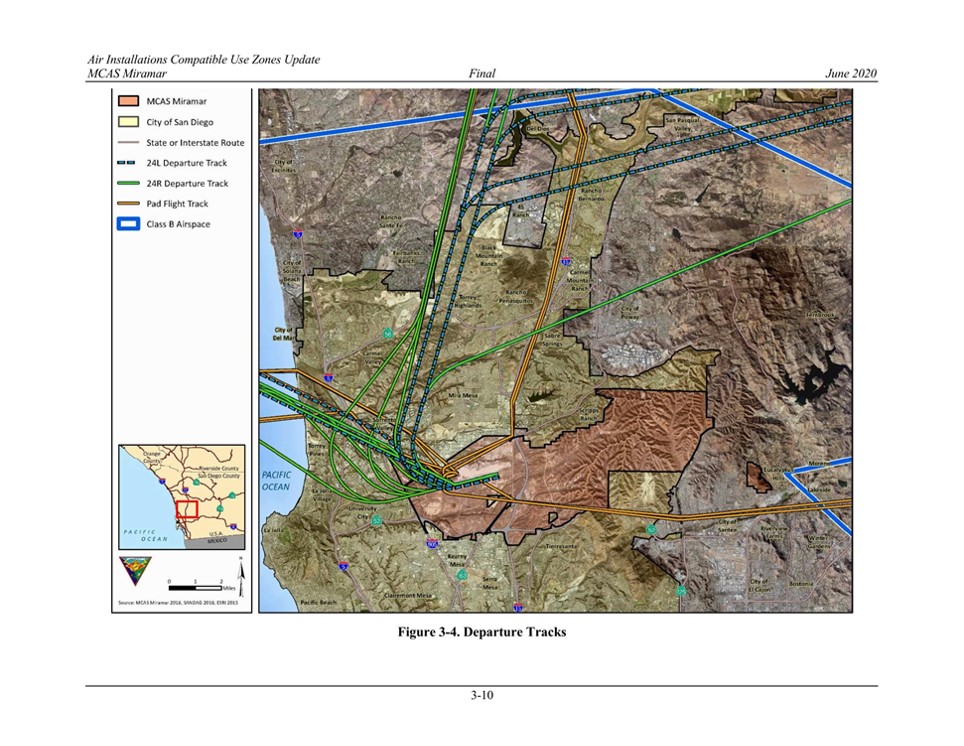