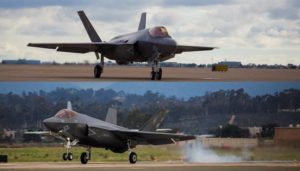 July 8 & 9, 2020: First evening FCLP practice for the F-35C produces distinctive howling/moaning sound. Recording courtesy of Ron Belanger from July 9, 2020, from his driveway on Cather Court, more than 3.4 miles from the FCLP training runway at MCAS Miramar. Available at https://bigblackboots.com/ebay/KNKX-FCLP-07-09-2020-20-38-PDT-stereo.mp3

West Coast Basing of F-35 Lightning II Joint Strike Fighter squadrons is expected at MCAS Miramar in 2020. Hanger construction and other preparations are well underway. The F35 will replace the F/A-18 Hornet at Miramar. In 2010, the Department of the Navy, in cooperation the Department of the Air Force, issued an Environment Impact Statement (EIS; also referred to as an Environmental Impact Report EIR) for the West Coast Basing of the F-35B. In 2018, the USMC issued a F-35C Noise Study February 2018** (Continuing Environmental Review Statement) for basing up to two F-35C squadrons in lieu of two F-35B squadrons at MCAS Miramar.

To add this book to your Google Play Library or download the Final Environmental Impact Statement for the West Coast Basing of the F-35B October 2010 as PDF, visit Google Books. View and search the final EIS content using the Google Books app below:

To add this book to your Google Play Library or to download the Draft USMC F-35B West Coast Basing EIS Appendices May 2010 as PDF, visit Google Books. View and search the EIS appendices content using the Google Books app below:

**The F-35C Noise Study February 2018 (Continuing Environmental Review Statement) is not available on Google Books. It is available as a PDF for download on the MCAS Miramar website. Search for Noise and Air Quality Study Marine Corps Air Station Miramar with F-35C February 2018 at https://www.miramar.marines.mil/

PURPOSE: Headquarters, United States Marine Corps (HQMC), Marine Corps Installations West (MCIWEST), and Marine Corps Air Station (MCAS) Miramar staffs have planned extensively for the introduction and home basing of the F-35B Lightning II aircraft at MCAS Miramar. On December 9, 2010, the Department of the Navy signed a Record of Decision (ROD) implementing Alternative 1 to base six operational squadrons at MCAS Miramar and five operational squadrons plus one operational test and evaluation (OT&E) squadron at MCAS Yuma (Navy 2010). Since the ROD was issued, changes to the Joint Strike Fighter Program have occurred, including changes to the aircraft series, number of aircraft, and construction requirements. The 2013 Marine Corps Aviation Plan directs two F-35C operational squadrons of 10 aircraft per squadron would be based on the west coast in lieu of two F-35B squadrons. To more accurately represent projected conditions, this analysis includes updated noise signatures and operational data for several aircraft types which became available subsequent to the ROD. This document presents the results of recent noise and air quality studies of the F-35C, to help decision-makers determine the need for supplemental National Environmental Policy Act (NEPA) analysis in accordance with Title 40 Code of Federal Regulations (CFR) 1502.9(c)(1)(i), Marine Corps Order (MCO) P5090.2A Section 12201.6.k, and USMC NEPA Manual Section 6.5.

F-35 PLANNING HISTORY AT MCAS MIRAMAR: From 2008-2010, an Environmental Impact Statement (EIS) was completed for USMC F-35B West Coast Basing. The ROD for that action was signed in December of 2010, with the decision to base six operational F-35B squadrons at MCAS Miramar. Since 2010, the USMC has adjusted its plans to include up to four F-35C squadrons in its inventory – two per coast (two each as part of 3rd Marine Aircraft Wing (MAW) on the West Coast in fiscal years 2019- 2024 and 2nd MAW on the East Coast in fiscal years 2024-2026) to be able to augment the Navy’s carrier air wings as needed. This document analyzes whether basing one or both West Coast F-35C squadrons at MCAS Miramar, in lieu of a corresponding number of F-35B squadrons, would represent a substantial change relevant to environmental concerns. Additionally, noise modeling data is now available for the F-35B, MV-22B, CH-53E, and KC-130J that was not incorporated into the 2010 noise analysis, so this document also analyzes whether that data constitutes significant new information relevant to environmental concerns and bearing on the Federal Action or its impacts.

DESCRIPTION OF SCENARIOS COMPARED: This report summarizes the results of noise and air quality studies based on a mix of two F-35C squadrons and four F-35B squadrons while incorporating the latest available noise data for the F-35B, MV-22B, CH-53E, and KC-130J. This is referred to as the “F-35C Scenario”. This report also presents the results of updates to the noise study for six F-35B squadrons reflected in the 2010 ROD and EIS. This is referred to as the “Updated ROD Scenario (Noise).” Air emissions data used in the 2010 EIS remain valid for the aircraft studied therein, so the 2010 ROD serves as the baseline for comparison to the F-35C Scenario for purposes of air quality analysis.

**The F-35C Noise Study February 2018 (Continuing Environmental Review Statement) is not available on Google Books. It is available as a PDF for download on the MCAS Miramar website. Search for Noise and Air Quality Study Marine Corps Air Station Miramar with F-35C February 2018 at https://www.miramar.marines.mil/

The Proposed Action addressed in this EIS would include: 1) basing of 11 operational F-3SB Joint Strike Fighter squadrons (176 aircraft), and 1 F-3SB Operational Test and Evaluation (OT&E) squadron (8 aircraft) on the West Coast of the United States; 2) construction and/or renovation of airfield facilities and infrastructure necessary to accommodate and maintain the F-3SB squadrons; 3) changes to personnel to accommodate squadron staffing; and 4) conducting F-3SB readiness and training operations to attain and maintain proficiency in the operational employment of the F-3SB and special exercise operations. The F-3SB aircraft would replace 126 legacy F/A-18A/B/C/D Hornet and 56 AV-8B Harrier aircraft in the Third Marine Air Wing (30 MAW) and 4th MAW.

This EIS evaluates the potential environmental impacts to the following resource areas: airfields and airspace; noise; air quality; safety and environmental health; land use; infrastructure and utilities; socioeconomics; community facilities and services; environmental justice; ground traffic and transportation; hazardous materials and waste; biological resources; topography, geology, and soils; water resources; and cultural and traditional resources. The Notice of Intent was published in the Federal Register on 15 January 2009, and the Notice of Availability of the Draft EIS was published on 21 May 2010.

For more information about the F-35 at MCAS Miramar, visit https://www.miramar.marines.mil/News/Press-Release-View/Article/1467255/fy18006-mcas-miramar-breaks-ground-on-f-35-hangar/

Note: UCCA board member Diane Ahern, who also serves on the Miramar Community Leaders Forum and is active with Citizens Advocating Safe Aviation, developed this reference page to provide easy access to these documents.