From the City of San Diego Communications Department: Following an announcement by the California Department of Conservation, the City of San Diego is actively notifying residents and property owners of proposed changes to earthquake fault zones within city limits that could potentially impact development and real estate transactions.

On Thursday, February 18, 2021, the California Geological Survey (CGS) released two maps that expand existing fault zones previously mapped within the City. The new maps delineate regulatory zones that encompass surface traces of active faults from La Jolla to downtown San Diego. These zones are at risk of surface fault rupture in the event of an earthquake.

Future development and construction proposed within these zones may be required to conduct a fault hazard investigation as part of the permitting process. Additionally, under state law, sellers in real estate transactions must disclose whether the parcel or real estate is located in an earthquake fault zone.

The CGS delineates earthquake fault zone maps under the Alquist-Priolo Act, https://www.conservation.ca.gov/cgs/alquist-priolo, established following the 1971 San Fernando earthquake. The last time one of these maps was released in the City was in 2003. Since then, more recent geologic studies have provided additional information to inform map updates.

“State geologists have been evaluating those geological studies and, on that basis, recommend expanding the earthquake fault zones, as reflected in the newly released Preliminary Earthquake Fault Zone maps,” said City of San Diego Senior Geologist Jim Quinn. “Informing the public about the risk of surface fault rupture within the fault zones identified on these maps will help increase awareness. The City is also obligated to screen all proposed development and building construction projects within the identified fault zones, and certain projects may be required to conduct a fault investigation as part of the permit process.”

The State Mining Geology Board has opened a 90-day public comment period to provide technical review comments on the updated maps. After the public comment period has closed, the maps will become official and the Alquist-Priolo Act requirements will become effective. All comments must be submitted to the State Mining and Geology Board before May 19, 2021, and addressed to:

After the public comment period, the State Mining and Geology Board will hold a public hearing. For more information, visit www.conservation.ca.gov/smgb

For information about this press release, contact Scott Robinson at 619-533-4586 or sjrobinson@sandiego.gov

View this media release and the Proposed Map for Earthquake Fault Zones as a PFD at https://www.sandiego.gov/sites/default/files/2021-02-22_fault_zones.pdf

For related posts about the Rose Canyon Fault, visit https://www.universitycitynews.org/?s=rose+canyon 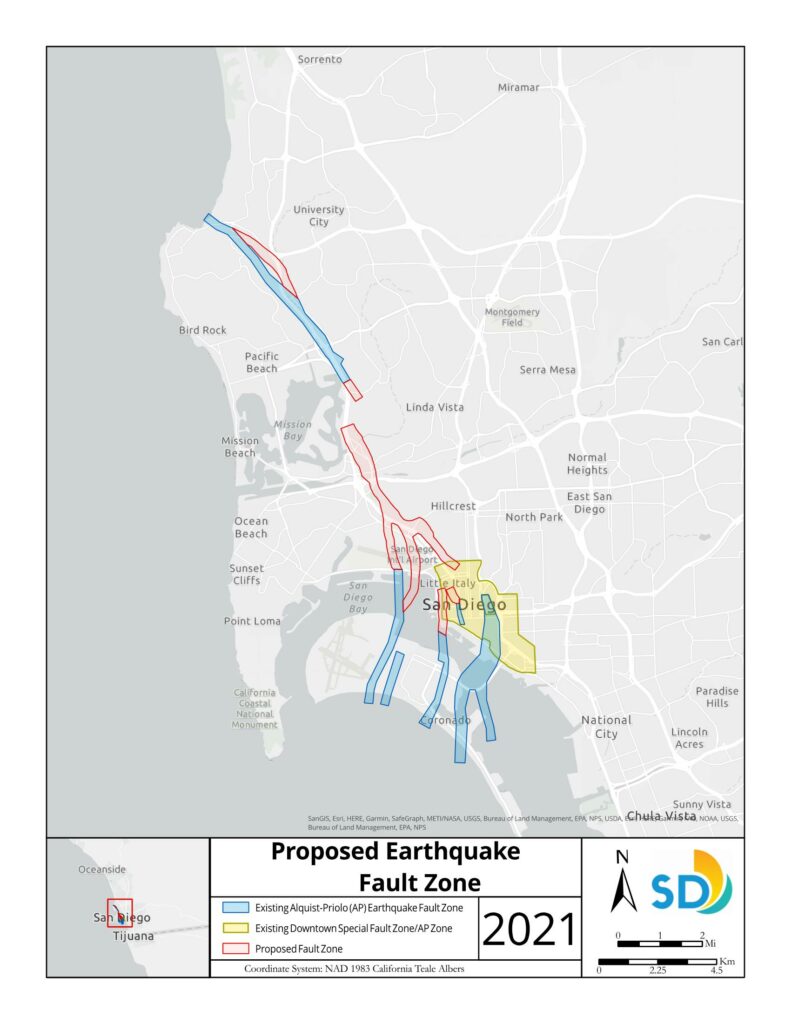