As posted on @JoeLaCavaD1 Facebook: [On Monday, June 14, City] Council passed the final FY22 budget. I advocated for and received funding to restore 2 park rangers previously cut from the budget, seed funding to establish a CIP [Capital Improvement Project] for the South UC Library [University Community Library] Expansion (a project that has been slated for fund​ing since 2002), and allocation for Public Power Feasibility study made possible by the hard work from Councilmember Sean Elo-Rivera.

For this, I thank my council colleagues for accepting these “on the dais” additions on top of the IBA recommended amendments ​which included several of my priorities.

While we did see some victories, my budget memo priority to add lifeguards was not funded. Given the high-demand of their jobs and federal implications with smugglers, I pledge to continue working to identify resources to aid them in their water rescues.

Balancing this year’s budget was no easy feat. When I was sworn in last December, we were facing an inherited deficit amplified by COVID-19. Since then, San Diego has received federal and state funding and began recouping some lost revenue from eased restrictions.

This budget is a stepping-stone, not a milestone. We have a ways to go until a full economic recovery and fully funding our city’s needs, but today we preserved the core services for our residents and laid the foundation to #BuildBackBetter. Thanks to all the San Diegans and organizations who made their voices heard in town halls, hearings, and briefings and thank you Mayor Todd Gloria and team for your fiscal prudence and focus on communities. 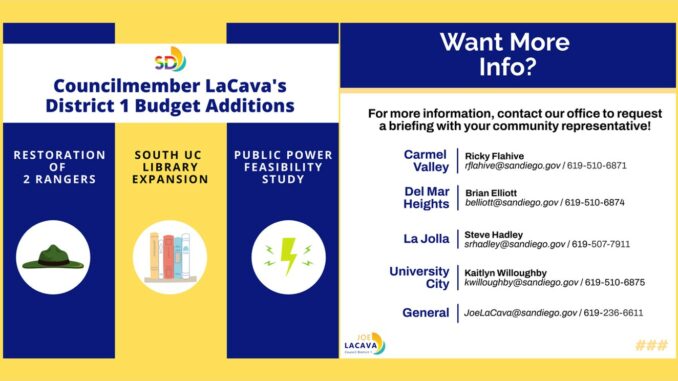