University City residents and others who live and work in areas adjacent to MCAS Miramar airport will get a preview of this year’s Air Show on Thursday, September 26, as aerial performers go through their demonstration and practice routines. This year’s Miramar Air Show is dedicated to first responders. For decades, the Marine Corps has been “America’s 9-1-1 force” and that idea was built upon the deeds and service of countless men and women in our first responder communities. The 2019 Miramar Air Show gives the public and current service members an opportunity to recognize and honor the contributions and sacrifices of our first responders. The Air Show also provides visitors the opportunity to see Marine Corps, Navy, Air Force, Army and civilian aircraft spanning 70 years as well as to get a firsthand look at Marine Corps tactical equipment.

While the 2019 Air Show performance dates are Friday to Sunday, September 27-29, military and civilian aircraft are expected to be seen and heard in the skies above University City and surrounding areas from Wednesday, September 25 to Monday, September 30. 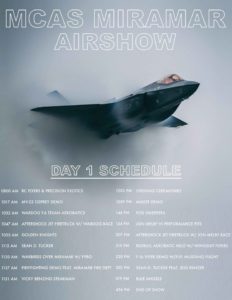 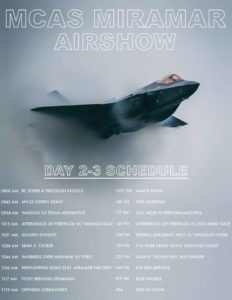 – UCCA urges all to follow current guidance from SD County Health and Human services related to coronavirus and COVID-19. https://www.sandiego.gov/coronavirus

We value your feedback and input. UCCA provides a forum where the interests of residents may be expressed and contributions made to the protection of life and property in the University City community. Please ‘Contact Us’ at https://www.universitycitynews.org/contact-us-or-volunteer-in-uc/

If you have a news item to share, please submit your story through UCCA’s Contact Us link at https://www.universitycitynews.org/contact-us-or-volunteer-in-uc/